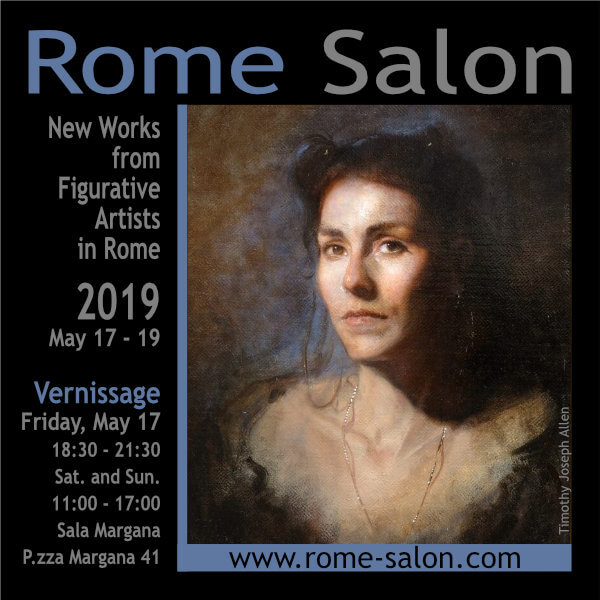 This Friday, May 17th, 2019, months of work will come to fruition. I and Denise Melvin, a friend and fellow painter, organized the first ever ‘Rome Salon’; a group show that brings together a total of nine figurative painters in a venue perfect for the occasion: the Sala Margana located just West of Piazza Venezia.

As part of the project we developed a website and a Facebook page, including a mission statement that I include below.

I’m hopeful this is only the beginning.

The Mission of Rome Salon
Not many years ago, working as a figurative painter in Rome felt like a lonely endeavor. Finding friends of like minds that weren’t centuries-dead was difficult.  Life drawing sessions were limited and often more social gathering for hobbyists than craft development for draftsmen.  Little encouragement was found in local art venues and even less in big name galleries that tried to convince visitors massive scribbles on canvas were comparable to the drawings of Michelangelo.  Indeed, it was difficult at times not to feel some despair: how could it be that the streets Caravaggio once walked were dead ends for dreamers of three-dimensional illusions on a two-dimensional picture plane?

As we near the end of the 2nd decade of the 21st century, some welcome cracks in those streets have appeared: a community of figurative painters, educators and patrons has emerged and traction on what once were perilously slippery san pietrini is now a viable possibility.

The goal of Rome Salon is to nurture further that community by bringing together a group of figurative painters that actively pursue their passion and present highlights of their recent work to the public.  In doing so, we hope to plant the feet of the figurative painter more firmly in the modern fabric of a city that is no stranger to a pointing hand, a suggestive glance, or an inviting vista made of oil and pigment.

Participants in the first Rome Salon are, from top, left to right:

Caravaggio and the Art of Subversion